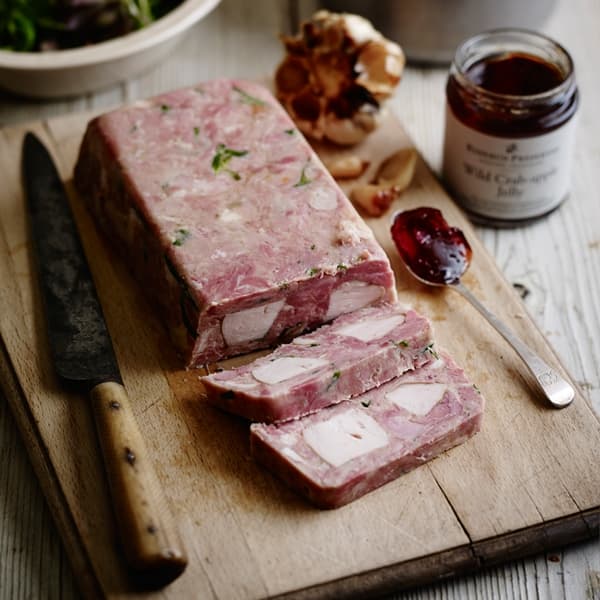 For the Terrine (Day One)

Sieve and set aside 400ml of the ham hock stock. While the ham is cooling, skin the chicken breast, remove any bones and cut into 1” slices across the breast.

Next, remove the bone from the ham hock. Discard the fat. Divide the meat into two lots. Leave the first in large chunks; break the second into smaller flakes. Put the smaller flakes into a mixing bowl. Add tarragon, Dijon mustard, salt and pepper and 200ml of the sieved stock, mix well.

Oil a terrine mould with a little olive oil. Line with cling film allowing 15cm extra on each side of the mould. Press the cling film into the base and sides of the mould removing any air bubbles. Place half of the ham mixture in the base of the terrine mould. Then cover the mixture with a layer of the larger chunks of ham and pieces of smoked chicken. Add the rest of the ham mixture and press firmly into the mould. Finally, pour over the remaining stock until the meat is just covered – approximately 200ml. Fold the cling film over the terrine and seal tightly. Place in the fridge for at least 12 hours.

For the Salad (Day two)

Heat the oven to 180Deg°C.
Coat the bulb of garlic in olive oil and roast for approximately 40 minutes until the cloves are very soft. Leave to cool.

Boil the potatoes until just tender (approximately 7 minutes). Allow to cool and slice.

For the Dressing
Combine the olive oil, lemon juice, Dijon mustard, salt and pepper. Cut off the root end of the roasted garlic and squeeze out the pulp. Add this to the salad dressing. Gently mix together the salad leaves, fresh herbs, potatoes and dressing.

Remove the cling film from the terrine and cut into generous slices. Serve with the potato, roast garlic salad and Rosebud Wild Crab-apple Jelly.