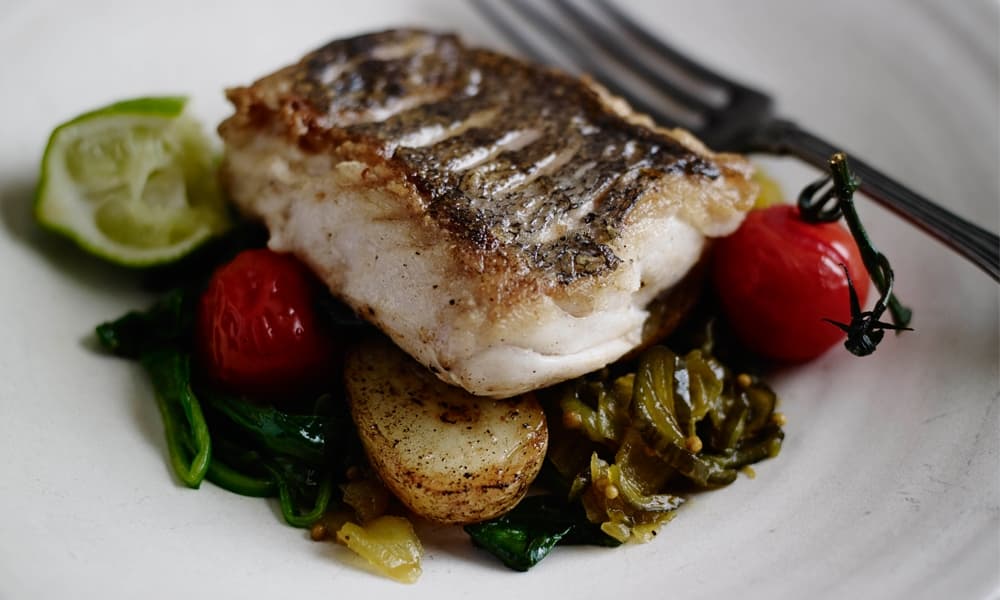 Put the tomatoes onto a baking tray. Drizzle with two teaspoons of olive oil and sprinkle with one teaspoon of sea salt. Cook for 12 minutes in the centre of the oven. Cover the potatoes with cold water and a level teaspoon of salt, bring to the boil and cook for seven minutes on a high heat until tender in the middle. Cover with cold water and leave until required.

In a large frying pan, heat three teaspoons of vegetable oil until medium hot. Add the spinach, which should sizzle, cook until it wilts, stirring constantly for approximately one minute. Place on crumpled kitchen paper to absorb any moisture.

Dry the same frying pan, add two teaspoons of olive oil and put onto a medium heat. Place the scored fillets, skin side down, into the hot oil. Do not be tempted to turn the fish over or move around the pan. Cook for five minutes then turn the hake and add three tablespoons of olive oil.

Place the cooked and sliced potatoes in the pan. Cook for two minutes until golden brown. Turn the potatoes, add the butter, and cook for a further two minutes until the butter is nut brown. Remove the fish from the pan. To the buttery potatoes add lime juice, Rosebud Sweet Cucumber Pickle and coriander. Stir gently to combine. Season generously with salt and pepper.

To serve, put the potatoes and sauce on to a plate. Top with a Hake fillet and finally the baked cherry tomatoes.